Try a Magazine and Catalog cleanse

By Ginny Ades, ESA Board President 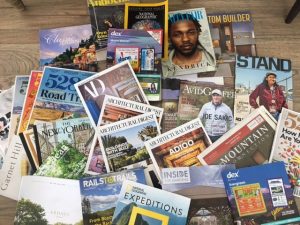 Returning home from a mud season get-away is always bittersweet; it’s great to be home in Evergreen but there are always some unwelcome tasks to catch up on. This year, I was shocked by the number of magazines and catalogs that had gathered at our house during our two-month absence. Hadn’t I conscientiously cancelled all these subscriptions and catalog mailings just a couple years ago? Well, yes, I had, but they have a way of creeping back into the mailbox!

So, one snowy day this spring (mud season lingered long after our return), I decided to tackle the pile of mail as well as a pile of other magazines we’d been hoarding. I wanted to see how well I could do with re-purposing and re-refusing what I’d collected. I could have dumped the entire stack in the recycle bin, but that, I felt, would be a waste of precious resources. Many of these catalogs hadn’t even been used! Ashamed and embarrassed at the waste, I wanted to do as right as possible by the trees used for these products. The more times we can reuse or re-purpose an item, the less impact we will have on depleting natural resources and causing greenhouse gas emissions that contribute to global warming.

I began with a stack of magazines and catalogs about 18” tall. The stack included some glossy Architectural Digests, some informative 5280 magazines, a couple National Geographics and other magazines, a huge Restoration Hardware catalog, a Dex phone directory, and many miscellaneous catalogs. Thinking of the mantra Refuse, Reuse, Recycle, I began at the beginning with Refuse.

Refuse. While it was too late to refuse the catalogs I’d already received, I got on-line and visited the website for each company from which I’d received a catalog. I cancelled 10 catalogs. Some websites made it easier than others to cancel, and, two months later, I am still receiving some of the catalogs I cancelled. Sundance, Frontgate and Garnet Hill persist in sending me catalogs and I will persist in asking them to stop sending them! However, seven others have ceased to fill my mailbox, and that is some progress. I can easily find them all on the Internet and they keep in touch with me via e-mail. No lost business for them.

Reuse. The Architectural Digests are full of beautiful pages and inspiration. And the 5280 magazines include lots of great information about Colorado. I knew somebody out there would enjoy reading these, so I called the Evergreen Library to see if they could take them. I learned that the library does generally take used magazines but that they couldn’t during COVID. I was told they hope to begin again by the end of summer 2021. They suggested I try Elk Run Assisted Living, which I did, and they were pleased to take my Architectural Digests and 5280 magazines. I immediately drove over (only one mile from my house) with them so their residents could enjoy them on the snowed-in day we were having. Feeling lighter, I returned home and confronted the remaining stack of catalogs and the few remaining magazines. I selected a few of the remaining colorful magazines to add to my craft supplies for making wrapping paper, greeting cards, and other projects. I thought it would be great to also offer these to preschools, art classes and the Center for the Arts Evergreen, but, with COVID, that would have to wait for a few months.

Finally, Recycle. Now left with a diminishing stack of mostly newsprint quality catalogs, I took a deep breath and put them in the recycle bin. That thick DEX phone directory, which routinely appears uninvited to our mailbox, was a tough one to add to the bin. While this one ended up in recycling, I did find the phone number to call to stop delivery of the directory—it’s 1.877.243.8339. I had to wait a few days to contact them since they are only open on week days but I was able to ask to be deleted from their deliveries. In so doing, I hope to move this item from my Recycle category to my Refuse category for a better showing on my next post-vacation mail cleanse. 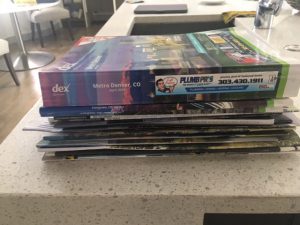 Pile left to recycle after cleanse

About the Author: Ginny Ades

Ginny is a founding board member of the Evergreen Sustainability Alliance and has worked with a variety of nonprofit organizations in the Evergreen area to promote the missions of conservation, energy efficiency and healthy communities. Ginny studied Environmental Science and Philosophy as an undergraduate; after moving to Evergreen with her husband in 1976, she earned a graduate degree in Urban Planning and Community Development. She worked as a planner for the City of Greenwood Village and in the Community Development section of the Jefferson County Planning Department in her early career, and, while raising her children, has spent most of the past 30 years utilizing her skills to advance community development and conservation through local nonprofit work. Ginny formed her business, Step Ahead Energy Efficiency Consulting, in 2009, and joined The EML Group in 2012, to help home and building owners create sustainable environments that are economical and respectful of our natural resources. She is interested in learning how to live more sustainably and is passionate about her role in helping to establish the Evergreen Sustainability Alliance as an organization that can reach and teach others in the community about sustainable lifestyles, as well.