Gardening with Dave: The Biochar Experiment

Not sure what piqued my interest in using biochar in my garden until I researched the subject on the internet to find numerous articles praising the idea. First a bit of background before I describe the experiment that I am working on. The following excerpt is from the U.S. Biochar Initiative (USBI):

“Biochar is a form of charcoal produced from super-heating biomass. It is found naturally in soils around the world as a result of vegetation fires. Biochar has also been created and used by humans in traditional agricultural practices in the Amazon Basin of South America for more than 2,500 years. Dark, charcoal-rich soil (known as terra preta or black earth) supported productive farms in areas that previously had poor, and in some places, toxic soils. Typically, jungle soils are very unproductive. After mixing biochar into the topsoil, the soil was able to retain vital organic matter, plant nutrients and moisture essential for plant growth. This practice allowed annual cultivation of the same fields, rather than slash-and-burn practices necessary to eke out crops on new land every few years. Given a stable location for agriculture and soils made fertile by char, a steady food supply was possible. This allowed for the establishment of large communities.”

Biochar is good for gardening. How does biochar impact climate change?

“When creating biochar, 50% of the original carbon in the biomass is captured and stored in the char. Human experimentation thousands of years ago revealed that biochar is a great soil amendment, increasing the productivity of most soils (thereby enhancing plant growth which absorbs more CO 2 ). Now we realize, when added to soil, biochar also captures and stores carbon that otherwise would oxidize and return to the atmosphere as CO2. Biochar-amended soils also provide a 50-80% reduction in nitrous oxide emissions. Nitrous Oxide released from certain fertilizers is a more potent greenhouse gas with 310 times more impact than an equal amount of CO2. Biochar is Carbon Negative–biochar reverses the fossil fuel deposition of CO2 in the atmosphere by removing carbon from the active cycle and sequestering it in the inactive carbon cycle. This process not only enhances soil fertility, it displaces much of the need for fossil fuel-based fertilizers, thereby making the biochar process carbon negative —as long as biomass production is managed in a sustainable manner.”

So, what is a retired geezer doing to test using biochar as a garden soil amendment?

Being a cheapskate, I looked into making it myself. There a lot of ways to make biochar on a small scale, however, most are not very appealing. I stumbled on to a website on how to make biochar in a woodstove using stainless steel steam table pans with covers. I found two used beat up pans on Craig’s List on the cheap and I was in business. The pans are the ½ size type that fit into my woodstove. Normally I burn wood in my woodstove for a few winter months on exceptionally cold evenings.

First, I used sawdust and shavings from my workshop then baled wood shavings and finally straw. I quickly found out that I had to fasten the top of the pans on fairly tight with screws to keep the biochar from burning up and leaving a grey ash. The goal is to pyrolyze the biomass without burning it up leaving predominantly carbon biochar. When the biomass in the pan reach a temperature of 500 to 800 degrees F, burning syngas appears like a propane barbeque flame around the edges of the pan cover. This tells me that pyrolysis is taking place and is close to complete when the flame goes out.

Here’s an image showing a pan with wood shavings on the left and a pan with the finished biochar product on the right: 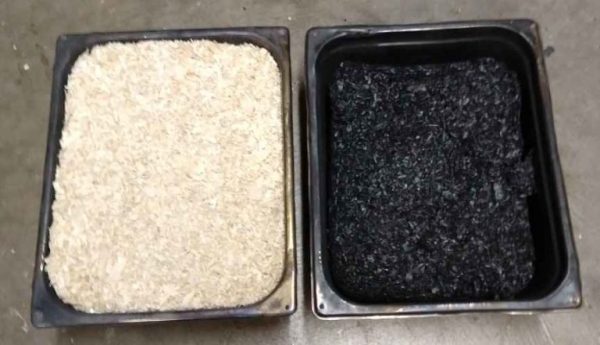 Here you can see biochar cooking on the woodstove: 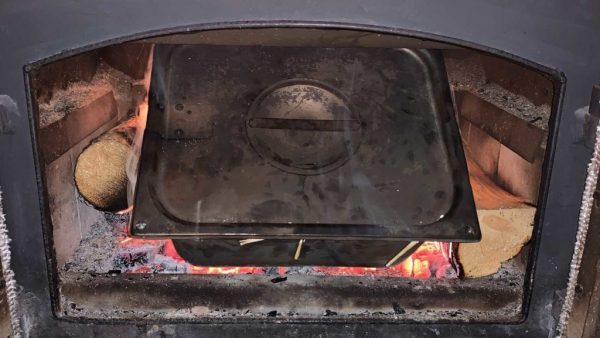 Inoculate the biochar with nutrients that plants need

After a few months of cooking biomass to make 45 gallons of biochar, it was time to take the next step which is to inoculate the biochar with nutrients that plants need.

Biochar by itself is not a plant nutrient. In fact, if it is not inoculated with some type of fertilizer, biochar will take up nutrients from the soil and will stunt plant growth for the first year. After several internet searches I decided to use alpaca manure compost (which I obtained free last Fall) and Organic 100 desiccated chicken manure fertilizer mixed 1:1 with biochar and saturated with water. I also threw in a few cups of flour to feed the microbes.

I now have 90 gallons of this mixture in tubs in my greenhouse. By early May the biochar mix will be fully inoculated (I hope) and ready to mix into the top 4 to 6 inches of my garden soil. To achieve approximately 5% biochar, I will apply one gallon of my mixture per 4 square feet of garden covering about 350 square feet total. My expectations are, of course, to have a more productive garden while using less water. Some sources say 20% to 30% less water. It’s also good to know that biochar remains active in soil for literally 100’s of years. So, it’s a one-time effort unless I want to expand from 5% to 10% biochar later.

Stay tuned this fall for the next chapter!

About the Author: Dave Lystrom

David Lystrom and his wife Karen have lived in Evergreen for 33 years enjoying the mountain lifestyle. Dave retired in 1999 as a senior executive with the U.S. Geological Survey. Since retirement, he has worked in the Evergreen community for about 10 years building homes as a volunteer with Habitat for Humanity. He especially enjoyed organizing construction activities and providing on-the-job training for new volunteers. Dave has served as Chairman of Trustees for the Evergreen United Methodist Church and as treasurer of the Board of Trustees for the Evergreen Unity Church. During his professional career and retirement Dave has had a longs-standing interest in environmental sustainability. At his home he has implemented energy efficiency, solar hot-water, solar electric, composting and outdoor plus greenhouse gardening. He has been active with the Evergreen Sustainability Alliance and has taken part in the Northwest Earth Institute courses. During 2013 he was a member of the Evergreen Sustainability Alliance’s Community Garden Committee and served as the project manager for construction of the Evergreen Community Garden at Buchanan Park.