Years ago, my husband and I were cruising on our rental bikes along the Neckar River in Germany enjoying a relatively easy ride from town to town over the course of a week. Most of the other riders on our scenic route were on traditional bikes as well, but once in a while an E-bike would cruise past us and I would silently snub my nose at it. 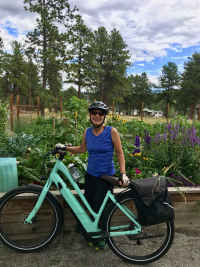 I never considered owning an e-bike.

That is, until, the fourth day into our riding. We were well into our forty-five kilometer ride of the day and still had another fifteen to go. Not a problem normally, but today we had been fighting a ferocious headwind and I was over it.

Exhausted and discouraged, I was dreaming of a cold beer and a hot bath at the end of the ride when an older gentleman whizzed past me. He was actually enjoying the same ride I was cursing, judging by the big grin on his face. I was humbled…(and jealous that he would get to his cold beer and hot bath long before me.)

And just like that, it seemed that e-bikes were everywhere (at least in Europe.) Or maybe I just noticed them more. Fast forward five years – I’m now the proud and shameless owner of a beautiful CRV (Car Replacement Vehicle) in the form of an aqua-green pedal machine.

And here’s the thing: it’s all the rage now!

Tony of Evergreen Bicycle Outfitters even expanded his business to include an e-Bike exclusive shop. A reluctant convert, he now is riding the wave of E-bike popularity. Between the increased awareness of green living and the pandemic scare, bicycling in general has shot up exponentially in popularity with e-bikes being the fastest growing mode of transportation in the bicycle world.

With over 250 days per year of sunshine in our glorious state of Colorado, it just makes sense to ride my bike for errands in town instead of jumping in a car. My bike is embellished with a couple of paniers that have carried everything from a change of clothes to groceries to a load of fresh vegetables from my plot at the community garden. I’ve become very adept at finding the road less traveled by cars and have discovered so many interesting trails and neighborhoods along the way.

And everywhere I go, I’m asked the same question: “How do you like your e-bike?”

Umm…easy riding, wind in my hair, feeling good about green travel and getting exercise to boot…

What’s not to love?!

About the Author: Melanie Crane

Melanie is guest blogger for the Evergreen Sustainability Alliance, and a local travel writer/author and optimistic Colorado gardener. Check out her website for more articles and photos about her travels here and abroad.